In this article of Rocks & Minerals we have discussed about the Rocks and minerals & their classification like metallic and non-metallic minerals, also covered features of minerals and also we will study important key points from different types of rocks etc… Many people ordinarily think of rock as something hard and stone-like. It is how rock in ordinary language is linked to hardness. ‘Hard like rock’ ‘strong like rock’ are some of the common idioms exemplifying this. But it is interesting to note that ‘silt’ is also a kind of rock. And so are pebbles, sand and soil. Rocks can be hard like granite and soft like clay. Therefore, the natural and solid part of the crust, be it soft like clay or hard like granite, is called rock.

Rocks are of many types. They have been made, or are still in the process of being made in different ways. Rocks may be millions of years old. History of mankind apart, the history of the earth is embedded in rocks. That is why the geologists describe rocks like pages of a book. It is a different story that the language of rocks is different from ordinary language of man. Only few people can understand the language of rocks.

The rocks and minerals have an intrinsic relationship. Rocks are made of minerals found in solid state. Each mineral is constituted of two or more chemical elements. The whole of the earth is thus made of these minerals. The earth scientists have so far identified about 2000 minerals. Out of these there are twelve common minerals found everywhere on earth. These 12 minerals are rock-forming minerals. Some other special minerals have become essential for industries and modern lifestyles. The common minerals are made up of eight elements found in adequate quantities in nature. About 87% of the minerals found in the earth’s crust are silicates.

Definition of Minerals:Naturally occurring inorganic substance with a definite chemical composition and ordinarily crystalline is called a mineral. Two types of minerals are:

Their surface is dull. They cannot reflect the sun-rays. Gypsum, quartz and mica are non-metallic minerals. Metals cannot be obtained from these minerals.

(iv) The internal structure of atomic in them is same

(v) Their chemical composition is similar.

Rocks are chiefly of three types: Igneous, Sedimentary and Metamorphic. 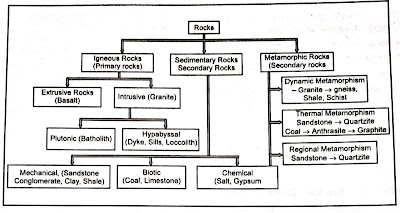 (1) The natural and solid part of the crust, whether that be soft rock like limestone or hard rock like granite, is called rock.

(3) Rocks are made up of minerals.

(4) Around two thousand minerals identified. Out of these 12 are common to all parts of earth and rock-forming.

(5) 87% of the minerals found in the surface of the earth are silicates.

(7) Two type of minerals are metallic and non-metallic.

(10) Intrusive rocks are of two types: Plutonic (Granite) and Hypabyssal (Dolerite and Pegmatite).

(11) On the basis of their formation igneous rocks are of two types – acidic (granite) and Basic (gabro and basalt).

(13) Characteristics of igneous Rocks: Granular, rich in minerals, no folds or layers, no pores, impervious, free of fossils, compact, hard and massive, not easily weathered definite order of crystallisation.

(14) The greatest importance of igneous rocks: quite, rich in minerals, metallic minerals, precious minerals-gold, construction materials, black soil is derived from it.

(16) Though they are spread over 75% of earth’s surface, they constitute only 5% of the volume of earth’s crust.

(22) Metamorphic rocks are formed when igneous or sedimentary rocks are wholly or partially changed in their character.

(27) Regional metamorphism -Temperature and pressure act together to transform sandstone to quartzite.