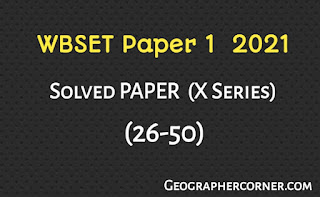 (i) On Krishna in AP

(iii) On Mahanadi in Odisha

(iv) On Cauvery in Karnataka

Q.27. Which of the following abbreviations used in footnotes and endnotes means ‘in the same place’?

(A) the methods used in data collection and analysis.

(B) the rules for writing a research report or paper.

(C) the specific methods of study and analysis.

(D) the theoretical paradigms for data collection, analysis and interpretation.

Which candidate has secured between 60-65 marks in average?

Q.31. A given mixture contains milk and water in the ratio 4: 3. If 5 litres of water is added to the mixture, the ratio becomes 4: 5. Find the quantity of milk in the given mixture.

(A) a summary of the various stages involved in designing a survey.

(B) an outline view of all the main clusters of units in a sample.

(C) a list of all units in the population from which a sample will be selected.

Q.33. The standard error is a statistical measure of

(A) the normal distribution of scores around the sample mean.

(B) the extent to which a sample mean is likely to differ from the population mean.

(C) the clustering of scores at each end of a survey scale.

(D) the degree to which a sample has been accurately stratified.

Directions: Study the following table and answer Question Nos. 34 to 37.

Expenditures of a company (in lakhs of rupees) per annum over the given years: Q.34. What is the average amount of interest per year which the company has to pay during the period? Q.38. Which one of the following represents the educated men but not urban?

Q.39. Which one of the following represents urban men government employees?

Q.41. Choose the missing word in place of (?) on the basis of the relationship.

Q.42. What is the next term in the following series?

Q.43. What is the next term in the following series?

Q.44. Identify the IP address from the following:

(A) an extremely large main memory.

(B) an extremely large secondary memory.

(D) a type of memory used in super computers.

Read the following passage and answer Question Nos. 46 to 50:

Sport is expected to operate at a higher moral plane where the effort is honest and transparency remains an abiding principle. It is a utopian ideal leaning on pure performance, copious sweat and relentless training. But in a practical world greased with greed, besides match-fixing, there is another terrible offence: ingestion of performance-enhancing drugs. Athletes like Canada’s Ben Johnson were labeled as drug-cheats and rightly denied their Olympic medals. The World Anti-Doping Agency (WADA). since its inception in 1999, has imposed stringent measures so that sport stays drug-free. In India, WADA’s rules have been enforced by the Government-run National Anti-Doping Agency (NADA) and almost all sports federations had fallen in line except one behemoth – the Board of Control for Cricket in India (BCCI). But that aberration was erased as the BCCI accepted NADA’s supervision following a meeting between its CEO a Rahul Johri, General Manager Saba Karim and Sports Ministry officials led by Sports Secretary Radhey Shyam Julaniya. Indian cricket’s governing body finally agreed to subject its players to NADA’s testing routines. Before its turn-around, the BCCI had resisted NADA’s intervention. The main objection pertained to the “whereabouts” clause, which made it mandatory for a player to reveal where he would be on a daily basis. The need for privacy was offered as an excuse.

Earlier, the BCCI had its in-house dope-tests but it only lent credence to the allegations about conflict of interest. The issue came to a boil when Prithvi Shaw was given a back-dated eight-month suspension after he tested positive for a banned drug. Terbutaline. The 19-year-old batsman, who was checked in February, claimed that the substance was present in an over-the-counter cough syrup. Shaw’s excuse and the BCCI’s quick acceptance of his self-medication, bred scepticism. It is either naivety or a classic cover-up from an Indian cricketer, who had been advised about the chemicals that have to be avoided even for therapeutic purposes. The silver-lining is that the episode hastened the BCCI’s move into the NADA’s ambit and also cleared the decks for the Indian women’s cricket team to compete in the 2022 Commonwealth Games at Birmingham. With the BCCI belatedly allowing NADA to monitor its domestic cricketers, by extension the International Cricket Council too has finally come under the WADA’s unerring gaze. In these hyper-kinetic times, it is a fallacy to stress that cricket is just a reflection of skill and that drug enhanced muscular efficiency cannot influence match results. Sport has to be a level-playing field and it is finally one with the willow-game subjecting itself to universal drug-testing rules.

Q.46. Which of the following options is closest in meaning to the word ‘behemoth’ as used in the passage?

(A) A large and cumbersome body

(B) A government agency

(D) A regulatory body for sports

Q.47. Which of the following statements is not implied in the passage?

(A) Sports persons need to be disciplined.

(B) Sports persons may try all means to win.

(D) Sports persons should be honest and obey rules.

Q.48. According to the author, The Board of Control for Cricket in India

(A) was unwilling to test its players for drugs.

(B) was reluctant to accept any of the conditions of NADA.

(C) was forced by the Sports Ministry to accept NADA’s conditions.

(D) was being over-protective of its players.

Q.49. Which of the following best reflects the author’s view of human conduct?

(A) Which is ideal regarding human conduct may not always be practical.

(B) People are usually honest and idealistic.

(C) People are irresponsible and need to be disciplined.

Q.50. Which of the following phrases used in the passage is not a metaphor?