Q.32. Which one of the following categories of urban land use as per given graph has the highest gradient of its economic rent at 2 km distance? 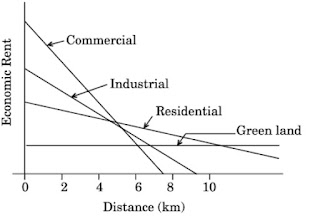 Q.33.  Which one of the following authors initiated concept of ‘Isodapanes’ in space-economy?

Q.34. Which one of the following indices is used to indicate if the optimal location was closer to either raw material source or the market? 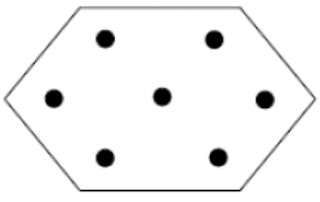 v Central Place Theory (CPT) is an attempt to explain the spatial arrangement, size, and number of human settlements.

Q.36. Which one of the following economic principles is correct for organisation of settlements based on K= 4 presented in the Christaller’s central place model?

Q.37. The Two Cycle Theory on the origin of limestone caverns was proposed by

Q.38. Which one of the following statements correctly explains the difference between Gravity model and Potential model?

The gravity model is based on Isaac Newton’s law of Gravitation.

Gravity Model was given by Stewart in which he explain about the population movements (migration).

Gravity Model holds that the interaction between two places can be determined by the product of the population of both places, divided by the square of their distance from one another.

The gravity model suggests that two separate groups of people, say in two cities, generate a mutual interaction proportional to the product of their sizes, and that this interaction is impeded by the frictional effect of the intervening distance over which it must take place.

Population potential indicates the intensity of possible interactions between social or economic groups at different locations. Therefore, it is an index of the nearness of people to one another and a measure of the influence of people at a distance.

Assertion (A): Central Business District (CBD) of a city has high concentration of wholesale stores, offices and cultural and recreational activities.

Q.40. Match List I with List II and choose the correct answer from the code given below

(iii) Theory that refers how price and demand on real estate changes as distance  towards CBD increases.

The bid rent theory is a geographical economic theory that refers to how the price and demand for real estate change as the distance from the central business district (CBD) increases. It states that different land users will compete with one another for land close to the city centre. This is based upon the idea that retail establishments wish to maximize their profitability, so they are much more willing to pay more for land close to the CBD and less for land further away from this area. This theory is based upon the reasoning that the more accessible an area (i.e., the greater the concentration of customers), the more profitable.

Q.41. Which one of the following statements correctly depicts the threshold according to Central Place Model?

(1) Point at which consumer movement is minimum

(2) Distance far which consumer will travel for a service

(3) Minimum number of people needed to support a service

(4) Economic base of a centre

Q.42. Which one of the following Models is explained by the given figure below?