Q.58. Match List-I with List–II and select the correct answer from the codes given below:

Q.59. What are the three basic aspects for spatial interaction are as described in Edward Ullman’s model?

Q.60. Given below are two statements, one labelled as Assertion (A) and other labelled as Reason (R). Select your answer from the codes given below: (Q.17.)

Assertion (A): Losch’s model is less restrictive than Christallers’s model

Q.61. Which one of the following principles explains importance of transport costs as it maximises the number of central places on straight line routes?  (Q.35)

Q.62. Which one of the following contributors made refinements to W. Christaller’s central place by including concept of ‘city rich’ sectors and ‘city poor’ sectors?

Economic Location Theory or Theory of Market by August Losch (1954)

August Losch published book titled “Economics of Location” in which he established a general theory of location.

This theory formulated in 1940 and was translated into English in 1954.

Losch’s study was based on the urban places of entire Germany, in which he took into consideration 150 commodities and services, including the manufacturing and industries.

Losch attempted to find a spatial structure that would be competent for both the producer and the consumer.

To identify it, he chose one production centre from the entire set of production points established on the planes.

He then arranged the hexagons in such a fashion so that this one centre was common for all.

He then rotated the hexagons around the central point and brought them to the rest where the maximum number of hexagons coincided, forming points of maximum demand, which should ideally develop for concentration of industry.

This modification of Christaller’s original model is important because many market areas of sizes K-3, 4,…, n are situated so that they all have at least one common center, and with the rotation of these hexagons we are able to achieve six sectors with central places that include many types of businesses.

This arrangement of linear clusters of central places conforms to the principle of least effort (that people will generally attempt to minimize the effort needed to do business, i.e. all else equal, they will trade at the nearest retail establishment).

The basic properties of the city-rich part of the model are that the greatest numbers of locations coincide, local purchases are maximized, distances between central places are minimized, and the volume of shipments and the total length of transportation routes are minimized.

The city-poor parts of the model account for an uneven distribution of population, cities, and businesses.

That is between the city rich and city poor sectors Losch located the main transport routes. It is these routes that radiate outwards from the metropolis at the centre, and are termed as Loschian Economic Landscape.

Q.63. In which year, M. Jefferson examined the size relationship between the primate city and next largest cities in a study entitled ‘The Law of the Primate City’?

Q.64. Which one of the following authors identified three basic factors affecting interaction between regions: Complementarily, intervening opportunity and transferability?

Q.65. Which one of the following codes is correct to show the optimal location to profitability in different spatial cost / revenue situations in diagram given below?

Q.66. The concept of liner market price boundary between the market area of two competing firms was given by

Q.67. Which one of the following authors suggested a fivefold division of adopters on the basis of the time lag between receiving and acting upon new information as shown in diagram below? 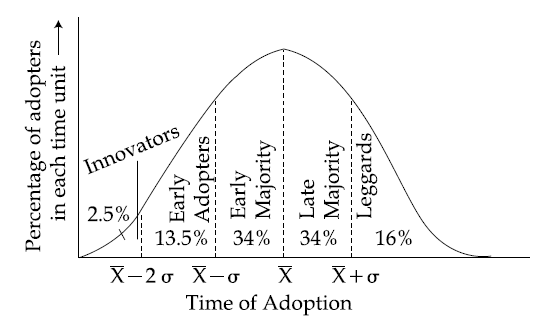 Rogers’ Theory of Diffusion of Innovations (1962)

Diffusion of innovations is a theory that seeks to explain how, why, and at what rate new ideas and technology spread.

Everett Rogers, a professor of communication studies, popularized the theory in his book Diffusion of Innovations; the book was first published in 1962, and is now in its fifth edition (2003).

Rogers argues that diffusion is the process by which an innovation is communicated over time among the participants in a social system. The origins of the diffusion of innovations theory are varied and span multiple disciplines

Rogers proposes that four main elements influence the spread of a new idea:

(1) Innovation – An idea, practice, or object perceived as new

(2) communication channels- Take the messages from one individual to another.

(3) Time- Refers to the length of time which takes from the people to get adopted to the innovations in a society.

(4) social system – Interested network group join together to solve the problems for a common goal.

(1) Innovators – The first individual to buy the product.

(2) Early adopters – Like to try out new things and already know much about the new product.

(4) Late majority –  Lags behind and will only buy the product after many other people have bought it and its popularity is already decreasing.

(5) Laggards–  Does not like innovation or change, waits until the sales price is lowered.