So, This is the official Questions Paper and Answer Key for the paper 3 conducted on 2015  , taken from official website

Note: This paper contains (75) multiple choice questions, each questions carrying two (2) marks. Attempt all of them.

Q.1. In oceans floors, a fracture zone is

(A) continuation of an inactive conservative plate boundary.

(B) a transform fault formed between two spreading axes.

Q.2. The statement that best satisfies the condition of geomorphic threshold is

(A) a riverbank is so undercut that it collapses.

(B) a lamppost becomes inclined due to soil creep.

(D) an earthquake initiates and a hillslope begins to shake.

Q.3. In slope replacement model, it is proposed that

Q.4. A flow is termed ‘critical’ when

(A) water moves at the same velocity as that of surface waves.

(B) water moves at a higher velocity as that of surface waves.

(C) water moves at a lower velocity as that of surface waves.

(D) water moves at 1.5-times faster than that of surface waves.

Reason (R) : The rectangular drainage pattern is controlled by joint or fault systems of the underlying rocks.

Q.6. Rhythmic beach features like cusps and horns are evolved by

(B) Dissipative waves, mainly during storms

Q.7. Tafonis are common features in

Reason (R): The large mass of ice-covered Antarctic continent is an important source of cold in the southern hemisphere.

Q.9. Assertion (A): The decrease of temperature with increasing altitudes in the atmosphere is called vertical temperature gradient.

Reason (R): Temperature decrease with increasing altitude is due to radiation and latent heat of condensation.

Q.10. Which among the following is/are the major factor/factors responsible for the monsoon type of climate in India?

Select the correct answer from the codes given below:

Q.11. Match List-I with List-II and select the correct answer using the codes given below the lists:

Q.12. Match List-I with List-II and select correct answer by using the codes given below the lists:

Q.13. The most plausible explanation for the location of the Thar desert in north-western India is

(A) the obstruction caused by the Aravallis to the rain-bearing wind that proceeds to the Ganga valley.

(B) the evaporation of moisture by heat.

(C) the absence of mountains to the north of Rajasthan to cause orographic rainfall in it.

(D) that the moisture carried by the south-west monsoon is driven away by the dry upper air current.

Q.14. Which of the following statement is not correct?

(A) Four gases-nitrogen, oxygen, argon and carbon dioxide amount for more than 99% of dry air.

(B) Ozone is produced by the recombination of oxygen by the influence of ultraviolet radiation at high altitude to form three atom molecules.

(C) Variations in the proportion of water vapour in air are major concern of meteorology and climatology.

Q.16. Which among the following statements correctly represents property of seawater?

Q.17. To get a reliable trend of sea level change from a given tide gauging station, the span of minimum continuous record required is

Q.18. Match List-I with List-II and select the correct answer using the codes given below the lists:

Q.19. The roles of decomposers in tropical rainforests are to

Q.20. Which of the following leaf modifications occur in the desert areas to inhibit water loss?

Q.21. Which of the following may result from a rise in global temperature?

Q.23. Who first provided a philosophical base to Geography?

Q.24. In India, university-level teaching of geography started first at

Q.25. One of the oldest Asian work of geographical importance, The Tribute of Yu is in

Q.26. Yi-Fu Tuan’s major contribution is in the field of

Q.27. The author of a famous early work Guide to Geography was

Q.28. Which of the following statements are true about “geography’?

(ii) It refers to a reverential attitude to and caring for the Earth.

Q.29. The idea of paradigm shift in Geography is based on which of the following works?

(A) The Structure of Scientific Revolutions – Kuhn

(B) The Nature of Geography – Hartshorne

(D) Being and Time – Heidegger

Q.30. The major factors affecting birth rate in a country are

(A) Demographic structure, Diets and Health, Education and Social Customs

(A) Primitive form of Homo sapien

(B) Primitive form of Homo erectus

(C) A form of Homo habilis

Q.32. The actual number of live births per 1000 women in the fecund range refers to

Q.33. What term is used for scattered population with a common origin?

Q.35. Which one of the following reasons for counter urbanisation is incorrect?

(A) The effect of economic recession on rural urban and return migration.

(B) The success of explicitly spatial government policies.

(C) The increase in the stock of potential outmigrants living in rural areas.

(D) The emergence of scale diseconomies and social problems in large cities.

Q.36. In migration analysis, the social distance does not take into account

(A) level and type of information possessed by interacting units.

(B) binding force of cultural patterns.

(D) superiority of one intervening unit over other units.

Q.37. In Gravity-Potential Model, the potential at a point of population concentration is not expressed by

(A) measure of the proximity of people to that point.

(B) measure of aggregate accessibility.

(C) measure of influence of people at a distance.

(D) measure of interaction of people among the settlements.

Q.38. A large business organisation that owns or controls production of goods and services in one or more countries other than their home country is called

(D) All of the above

Q.40. The set of criteria adopted by Hartshrone and Dickens for demarcation of agricultural regions did not include

(A) percentage of agricultural land under cultivation.

(B) association of crops.

Q.41. Assertion (A): Agriculture in Monsoon Asia is characterised by the predominance of food crop cultivation.

Select correct answer from the codes given below:

(R) is not the correct explanation of (A)

Q.42. A ‘Leading Industry’ should have the following characteristics.

(A) It is a relatively new and dynamic industry with an advanced level of technology.

(B) It is labour intensive and has a strong regional base.

(C) It has high income elasticity of demand for its products.

(D) It has strong inter-industry linkage with other sectors.

Which of the above characteristics is not true?

Q.43. Match the industries by their types

Q.44. The Suez Canal, Strait of Hormuz and the Straight of Gibralter are important because they

(A) prevent attacks on bordering nations.

Q.45. The Iceberg transport cost model was put by

Q.46. Territorial claims on a neighbour are called

Q.47. Who is given credit of laying down the foundation of nation-state concept?

Q.48. Who coined the term lebensraum?

Q.49. Hearth of Buddhism is

Q.51. Which of the following are correct matches?

Q.53. Awadhi is the dominant dialect of

Q.54. For identification of backward areas, the Planning Commission of India appointed a committee after the name of its chairman as

Q.55. The National Rural Employment Programme of 1980-81 was redesigned from an earlier programme named as

(B) Crash Scheme for Rural Employment

Q.56. In the Globalisation process concerning India and developed countries, the basic objective not agreed upon between the parties is

(A) Free flow of capital

(B) Free flow of technology

Q.57. The characteristic not relevant for conceptualization of Planning Region is

(A) neither too big nor too small a size.

(B) flexibility of its boundaries.

List-II (No. of Macro Regions Identified)

Q.59. The non-economic concept of ‘Social Capital’ was formally defined by

Q.60. The economies that are not available in the area constituting the growth pole of a region are

(A) economies internal to a firm.

Q.61. Consider the following statements and select the correct answer using the code given below:

(3) Mawsynram records the highest amount of rainfall in India.

(D) All of the above are correct

Q.62. In India, deciduous forests are found in the areas

Q.63. Give the sequential order to the following coastal regions in an anticlockwise direction.

Q.64. Which of the following states of India is passing through the stage of Demographic Transition which entails low fertility and low mortality?

Q.65. Which one of the following is a ‘Formal Region’?

Q.66. Assertion (A) In India agriculture is a gamble on monsoon.

Reason (R): The variability of rainfall is more than 10 per cent over the greater parts of India.

Q.67. Which of the following is not the part of great plains?

(B) Marusthali and Bagar areas of Rajasthan

(C) The Brahmaputra Valley of Assam

(D) The lowland of Chambal basin of M. P.

(A) one-quarter of RF

Q.69. In remote sensing, the expression ‘28’ is commonly associated with

(A) the launch date of IRS-1A satellite.

(B) the establishment date of ISRO.

(C) the establishment date of NRSC.

(D) the launch date of first rocket from Sriharikota.

Q.71. In satellite multispectral data, the ideal band for land-water discrimination is

(A) a zone where ground truth verification needs to be done.

(B) a zone where ground truth verification is complete.

(C) a zone where land use or land cover is certainly known with or without ground truth verification.

(D) a zone where pixel characteristics are certainly known with or without ground truth verification.

Q.73. Which among the following shows positive g2 in a Kurtosis?

Q.74. Negative correlation is represented by which of the following diagrams? 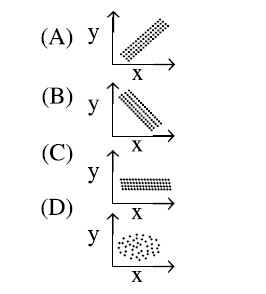 Q.75. In which sampling method each member of the population has the same probability of being included in the sample?