Here In this post we have discussed about the aims and objectives of geography, along with methods and techniques of geographic study like inductive and deductive methods, also discussed specialization in geography and its main branches … 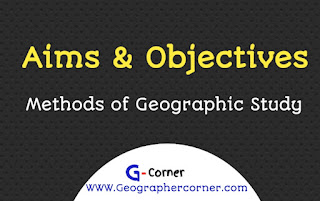 Aims and Objectives of Geography

The principal aim of geography is to study any specialised area. Three important considerations for conducting this study are:

(i) That the subject under consideration is a part of earth.

(ii) That a complete study will be conducted. It means that all aspects will be taken into consideration.

(iii) That the area under consideration is a nature’s creation and it will be studied in its animated aspect.

Sometimes this area study may require great emphasis on one single aspect. Because this particular aspect of the area may be more important to the totality than other related aspects. This can better be understood with the help of an example. Assuming that we have to study Rajasthan desert in relation to its natural setting and occupations of its inhabitants by considering all the important natural and man-made which distinguish this region from its neighbours. In this context we may study separately in detail, chief features of micro-climatic variations in the Rajasthan desert and the behaviour of ground water in it.

The first approach is termed as ‘Regional Geography’ and the second as ‘Systematic Geography. Both are essential for geographic study. Some more details are discussed about this at the upcoming regional geography post.

Methods and Techniques of Geographic Study

Geography is also a science. Like other scientific subjects we also make use of scientific methods and logic for the study of geography. Three important considerations for this scientific study are the following:

(i) An orderly system of gathering the facts that are relevant to the subject. (ii) They are then classified on the basis of similarities.

(iii) At the end an effort is made to draw some meaningful inferences based on clear reasoning.

Inductive Method: It is a method of sifting of facts. In the first instance data is collected. After this similarities in observed facts and relationships are identified. Then certain inferences are drawn. In other words general rules are prescribed on the basis of observed patterns and examples. This method leads from specific to general.

Deductive Method: Under this method inferences are deduced on the basis of stated facts. In other words search for principles is conducted. This method leads from general to specific.

Geographers use both these methods to draw some useful inferences. These inferences are then analysed and tested to provide factual information. This testing is known as empirical testing or one stating a general relationship between variables.

Techniques are certain procedures with the help of which facts are analysed. They are then further sifted, processed and interpreted. How to solve a problem under a particular situation or what method to use, is generally decided by the geographer according to his own needs and capability. The geographers use a variety of materials collected from various sources and then present them in statistical form, maps, charts and graphs so that the underlying facts could be understood easily. The geographers then transform this data by using two techniques.

(i) Cartographic Technique: Data collected from various sources is transformed into carto graphic form. In graphic form figures and facts are understood easily. Such maps and charts can also be remembered easily. The maps can be explained or described to arrive at some conclusions.

(ii) Quantitative Method: In this method statistical data collected through field studies is studied, analysed and described to explain certain geographic phenomena or a field situation.

Relation of Geography with other Disciplines

As we have stated earlier that geography is a developing science. Its content material is expanding continuously. To strengthen contents it draws a great deal from other sciences. Geography today covers a wide range of subjects and has its own independent viewpoint. It is for this reason that it adapts the materials drawn from other sciences to meet its own needs and purposes and thus maintain an independent status. Not only this geography also enriches other allied sciences. For the enrichment of its own contents it draws heavily from physical and social sciences. This is further explained in Figure

Figure concerns Cyclic Pattern of Geography. This figure demons trates the chief interrelationships between geography and physical and social sciences. It shows how geography has many interdisciplinary and allied areas.

Specialisation in Geography and its Main Branches

Today world is undergoing knowledge revolution. Every morning a ray of new knowledge dawns on us. The fund of knowledge is, thus, increasing day by day. The subject of geography cannot remain isolated from this development. Much Research work has been done in geography. As a result there is constant growth of geographical content and certain variations also occur. The geographers are also presenting their views on new subjects. Election Geography, Socialist Geography, Medical Geography, Time-space Geography, Necrogeography, Welfare Geography are some of the new and emerging fields of geography. All these fields have developed in the past few years.

In order to make study of geography more convenient, comprehensive and simple, the subject matter of geography is divided into two main branches – Physical and Human geography.

Physical geography is concerned with the study of atmosphere, mountains, plateaus, plains, rivers, soils, vegetation, wildlife etc. As against this human geography is concerned with man-made features or influences by man. The feature such as crops, agricultural fields, cities, villages, industries, roads, railways are all man-made. These are mainly studied in human geography. In these man-made features one can also notice cultural aspects of mankind. They are therefore also known as cultural features. These branches and sub-fields of geography can best be illustrated graphically below: