Geomorphology MCQS from the chapter Origin of the Earth and Geological Time Scale, here you will get 25 questions and these are very basic and important mcqs for Net Set exams. 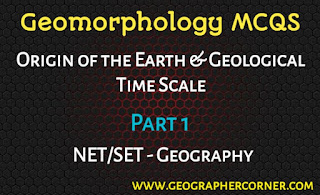 Origin of the Earth and Geological Time Scale MCQ Part 1

Q. 1. The congregation of stars and planets is known as

Q. 2. The diameter of the whole solar system is about

Q. 4. Who used the term ‘concentric rings’ in his hypothesis?

Q. 5. Which hypothesis is based on ‘dualistic concept’?

(d) None of the above

Q. 6. Who propounded the “gaseous hypothesis” in the context of the origin of the earth?

Q. 7. According to which hypothesis of the origin of the earth was based on the sound principles of Newton’s laws of gravitation and rotatory motion?

Q. 8. Who gave the term ‘Primordial Matter’ in his hypothesis?

Q. 9. Which was the first scientific attempt for the explanation of the origin of the earth?

Q. 10. Exposition of the World System’ was written by

(a) Group of stars

(b) A huge and hot gaseous mass

(d) None of the above

Q. 13. The significance of the ‘Nebular hypothesis is that

(a) It described the constitution of the earth

(b) It was based on mathematical formulation

(c) It is able to explain the peculiar distribution of the present day. angular momentum in our solar system

(d) All of the above

(a) Hoyle and lyttleton

(b) Jeans and Jeffrey

Q. 15. Who has attempted to describe and explain the evolution of different components of the earth e.g. continents and ocean basins, folds and faults, volcanoes and earthquakes etc. and the origin and evolution of its atmosphere through specific periods or stages?

Q. 16. Who had propounded the “Tidal hypothesis” to explain the origin of the earth in the year 1919?

(b) Giant cigar-shaped tide of thousands of kilometres in length

Q. 19. According to which hypothesis, the solar system was formed from the sun and another intruding star

Q. 20. Which hypothesis has not only explained the origin of the solar system and the earth but has also attempted successfully, to some extent, to solve various problems of the solar system related to its shape, size, structure and peculiar motion?

Q. 22. ‘Supernova hypothesis’ is propounded by

Q. 23. Which hypothesis was based on the principles of ‘Nuclear Physics’?

Q. 25. Which hypothesis solves almost all of the problems of the peculiar characteristic features of our solar system like  (i) near circular and similar planes of orbits of the planets  (ii) placement of planets according to their size (iii) high density planets in the outer circle of the solar system  (iv) large and peculiar distribution of angular momentum among the planets of solar system etc.?