Q.43. Which one of the following code is correctly depicting the pattern of distribution of population among cities by ‘d’ curve in the given graph? 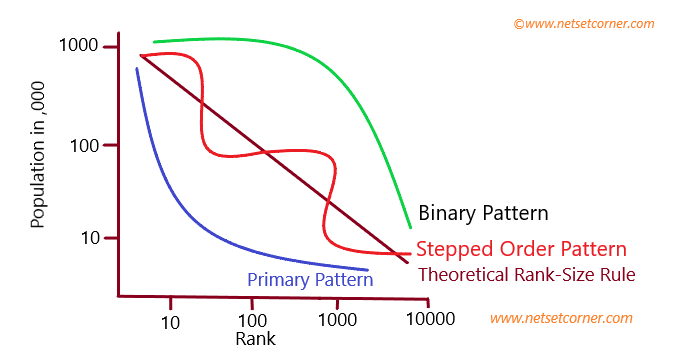 Q.44. Which one of the following statements indicates to the potential use of a service at a location according to Gravity Model?

(1) Direct relationship to both population size and distance

(2) Inverse relationship to both population size and distance

Q.45. Among the following scholars, who introduced the concept of ‘Least-Transport-Cost Location’ using the frame of ‘Location triangle’?

Q.46. Which one of the following conditions Alfred Weber introduced in his concept of ‘Locational Triangle’? 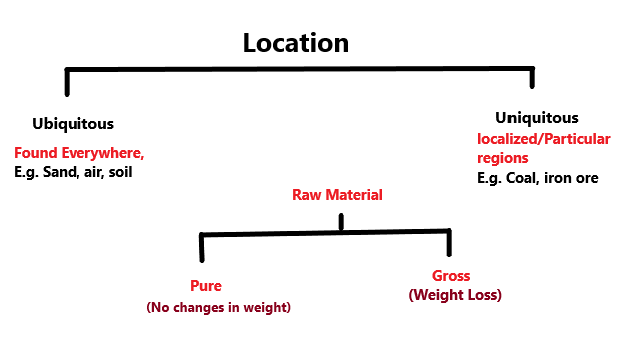 If the weight of raw material remains the same even after processing, it is called Pure Raw Material

If the weight of raw material is reduced in weight after processing, it is called Gross Raw Material.

(iii) If RM1 is Gross & Fixed and RM2 is also Gross & Fixed– Industry will be located at Central/Middle Point. 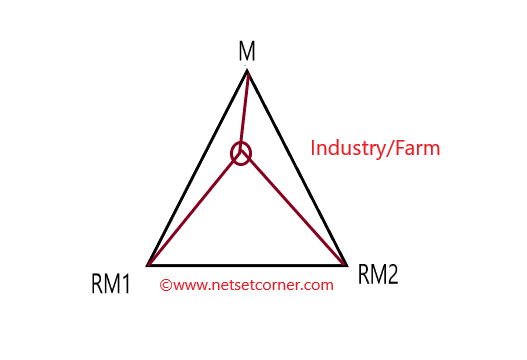 Q.47. The Rimmer model for the development of land transport system in less developed economics was proposed in which of the following years?

Q.48. Which one of the following statements is very correct in context of the concept of Growth pole and growth centres?

(1) Both the Growth pole and Growth centres are uniformly distanced in the region.

(4) There does not exist any rule in the distance between Growth pole and Growth centres.

Q.49. Which one of the following principles denotes K-4 of Christaller’s Model of central places?

Q.50. Which one of the following was not assured by weber in his least-cost theory?

Agglomeration economies can lead to decreased the transport and labor costs and weber also talked about tendency to agglomerate.

Q.51. Which one of the following is not included in the Ravenstein’s Laws of migration?

(1) Most migrants proceeds step by step

(2) Most migrants go for short distance

(3) Most migrants move from Urban to Rural area

(4) Most migrant are adults

Q.52. Which ONE of the following is not in conformity with the central place theory?

(1) Central place is a settlement providing services for the population of its hinterland.

Q.53. Match List-I with List–II and select the correct answer from the codes given below:

Q.54. The gravity principle in identification of nodal regions states that the interaction between two geographical points is directly related to their

Q.55. Which one of the following letters represent the total number of settlements of a certain order served by a central place of the next higher order?

Q.56. The rule “size of population of nth ranking town in a region will be 1/nth of the largest city in terms of population’’ was given by:

Q.57. Who among the following is credited with incorporation of concept of geographical space in the Growth Pole Theory?