Q.68. Match List-I with List-II and select the correct answer from the codes given below:

(ii) Position of the breaking point between two towns

Q.69. Match List – I with List – II and select the correct answer from the codes given below:

Q.70. The ‘Mobility Transition Model’ of migration was given by:

Q.72. Which one of the following authors has given the concept of “Demand cone” as shown in the diagram?

Q.73. Match List- I with List-II and select the correct answer from the codes given below:

Edgar Hoover in 1937 published a study of the shoe and leather industries and in 1948 gave his first theoretical statement in his book – ‘The location of Economic Activity’.

His work ‘Location theory and the shoe and Leather industries’ contain both a theoretical statement and two major case studies.

(1) There is perfect competition between producers or sellers at any one location.

(2) There is perfect mobility of factors of production.

(3) The transportation costs and production or extraction costs are the determinants of location.

(4) Buyers are ‘economic men’, i.e. they obtained the commodity from their source that offers the lowest delivered price.

Principle: Hoover’s theory is based on delivered prices. The delivered prices to any buyer will be the cost of production/extraction plus transport cost. This is represented by isotims lines joining places of equal delivered price. Hoover considers extractive price first, where the locations of the deposits are given and attempts to find the area that each producing point will serve. There is a given point where extraction takes place. If the cost of extraction does not vary with output, the transport costs are the only variable affecting price. But it will be also affected by diminishing returns scale.

Hoover argues that extractive industries characteristically operate in a situation where average cost rises with increased production as the market area gets larger. This effect is shown Figure.

And for Manufacturing industries, the cost of production decreases with rising output, thus the margin line will fall increasing distance from the production point. This is because output raises as the market area is enlarged to create economics of scale. When the point of diminishing return is eventually reached, the margin line will turn upwards.

An early attempt to explain industrial location through the profit motive was made by Harold Hotelling (1929).

In his theory, the impact of demand was considered together with the idea of locational interdependences, whereby firms in perfect competition arrange themselves spatially for mutual sales benefits.

This theory deals with the impact of demand considered together with the idea of locational interdependence, whereby firms in perfect competition arrange themselves spatially for mutual sales.

It is presumed that:

Q.74. Whose theory did propagate that ‘an area is poor because it is poor’:

Q.75. Which of the urban structure models labelled three areas: (1) The city of death, (2) the city of need and (3) the city of superfluity

The exploitative model divides the city into three semi-circular concentric zones on the basis of ownership of resources and ability to pay.

It clearly shows how money flows from inner-city to outward zones towards affluent urban sections.

This model was developed along the Detroit River.

(3) ‘The city of superfluity

Q.76. Which one of the following is correct sequence of urban land uses in respect of ab, bc and cd as per given graph? Image of Correct Sequence of Urban Land 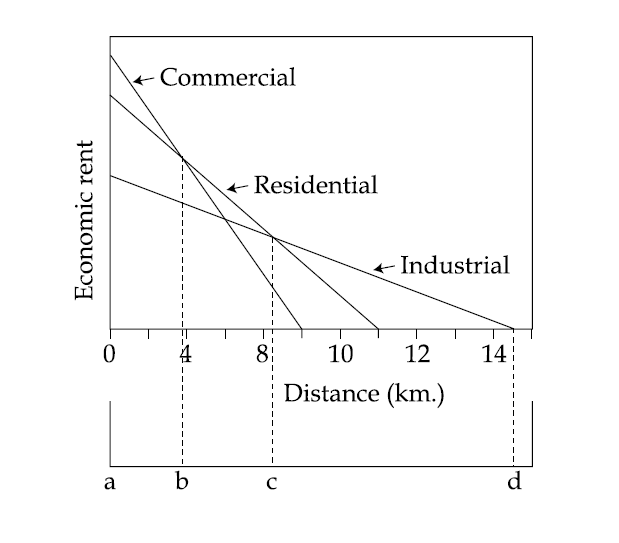 Q.78. Which one of the following is the propounder of the shown model?

Q.79. Match the following List – I with List – II and select the correct Answer from the codes given

Q.80. Q. Which one of the following is the correct sequence of stages of urban development as postulated by Lewis Mumford?

(i) Ecopolis: A small town of village origin based on agriculture, mining and fishing.

(iii) Metropolis: It is a large city with 10 lakhs of population.

(v) Tyranopolis: In this country wide urbanization predominated the scene. Here the

display and expense become the measurement of culture.

(vi) Nekropolis: It is known as ghost city or dead city. This stage come due to war,

Q.81. Match the following List – I with List – II and select the correct answer from the codes given:

Q.82. Q. Match the following List – I with List – II and select the correct answer from the codes given:

Q.83. Who propounded the Heartland Theory used in political geography?

Q.84. Given below are two statements, one laballed as Assertion (A) and the other labelled as Reason (R). Select your answer from the codes given below:

Reason (R): Losch treated each function as having a separate range, threshold and hexagonal hinterland.

Q.85. What are the three bases for spatial interaction as described in Edward Ullman’s model?

(A) Complementarity, Transferability and intervening opportunities