Q.21. In D.M Smith’s theoretical model of the spatial margins to profitability, if cost is constant, the space-revenue curve would be

Q.22. D. Whittlessey divided the whole world into how many types of agrilcultural region?

Whittlesey has identified the following 13 types of agricultural system regions—

Q.23. Which one of the following is the basis of Thornthwaite’s classification of climates?

Q.24. Which one the following statements is true for Sadler’s theory of population growth?

Michael Thomas Saddler an economist and a British social reformer was a contemporary of Malthus.

He presented his ideas about population in his book “The Law of Population.”

According to him the natural law of population growth was exactly opposite to that expounded by Thomas Robert Malthus.

Concept of this Theory:

Q.25. Who among the following proposed the core-periphery model of economic development?

Core-Periphery Model developed by John Friedman in the year 1966.

As per Friedman some regions developed rapidly because of some favorable reasons and became the core of development, periphery of these core is the area of the undeveloped region.

It supplies finished product to the periphery regions. 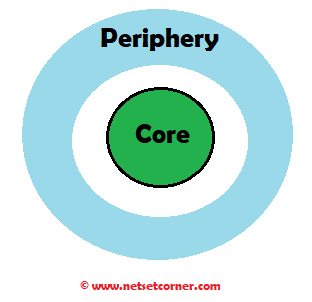 John Friedman proposed that the world can be divided into four types of regions. These are

Core regions refer to centers, which are usually metropolitan. These centers typically have a high potential for innovation (improvement) and growth.

Regions Upward transition regions are areas of growth which spread over small centers, rather than at the core.

This refers to a newly colonised region at the periphery of a country which is un brought into production for the first time.

These are regions on the periphery characterised by depleted resources, low agricultural productivity or by outdated industry. 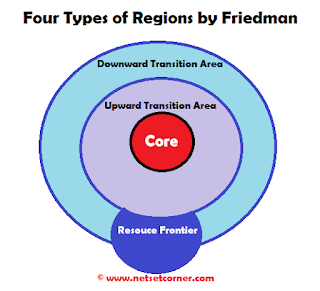 Q.26. According to A. Pred, the location of an industry is closely associated with which among the following approaches?

Allen Pred published his theory entitled ‘Behaviours and Location’ in which he devised a behavioural matrix to illustrate and analysis of locational decisions.

Q.27. City I has population of 2,00,000 and city II has population of 6,00,000. They are 50 miles apart. Which of the following will be breaking point (BP) boundary marking the outer edge of their respective trade areas accrding to Reilly’s Law of Retail Gravitation? 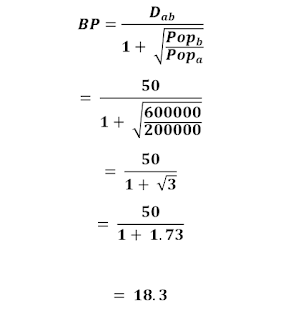 Dab = Distance between city a and city b

According to Reilly’s “law,” customers are willing to travel longer distances to larger retail centers given the higher attraction they present to customers.

Developed a formula to find the retail break-point between two cities based on their populations.

List-I  (Number of settlements of different orders of  Walter Christaller)

Q.29. Who amongst the following propounded the ‘Theory of Intervening Opportunities’?

Q.30. Which one of the following is not matched correctly?

He Published ‘An Essay on the Principle of Population’ in 1798

Q.31. As per Edward Ullman’s mode of transport system, which one of the following describes complementarity?