So, This is the official Questions Paper and Answer Key for the paper 1 conducted on 2020 , taken from official website

Q.1. The main objective of teaching is

(A) scoring high marks in the examination.

(B) completing the syllabus thoroughly.

(C) helping to get suitable placement.

(A) National Mission on E-learning through ICT

(B) National Mission on Education through ICT

Q.3. Introducing internal assessment as part of the evaluation process is good because it helps the teachers to

(A) encourage the students to behave well in the class.

(B) give weightage to the behaviour of students in the classroom.

(C) know the formative process of the students.

(D) improve the aggregate score of the students.

Q.4. A deductive theory is one that

(A) allows theory to emerge out of the data.

(C) allows for findings to feed back into the stock of knowledge.

Q.5. Which branch of philosophy deals with knowledge, its structure, method and validity?

Q.6. (i) The method is psychological and imparts knowledge in a natural manner without any assumption or presumption.

(ii) It is a scientific method which is based on visible elements or facts.

(iii) This is the best method as it teaches the student to think for himself.

(iv) As the result of acquiring knowledge through this method, the feeling of self-confidence and self-dependence is developed in the student.

All the above are related to which method of teaching-learning?

Q.7. A null hypothesis is

(A) hypothesis of no difference.

(B) hypothesis that assigns value of zero to the variable.

(D) hypothesis which can neither be proved nor disproved.

Q.8. The study of role of time in communication is known as

(A) as cited above

(B) as cited opposite

(C) as cited in the appendix

(D) as cited in the bibliography

Q.11. What will be the number of females above poverty line in the State ‘D’ if it is known that the population of State ‘D’ is 7 million?

Q.13. If the population of males below poverty line for State ‘B’ is 2.4 million and the same for State ‘E’ is 6 million, then the total populations of States ‘B’ and ‘E’ are in the ratio of 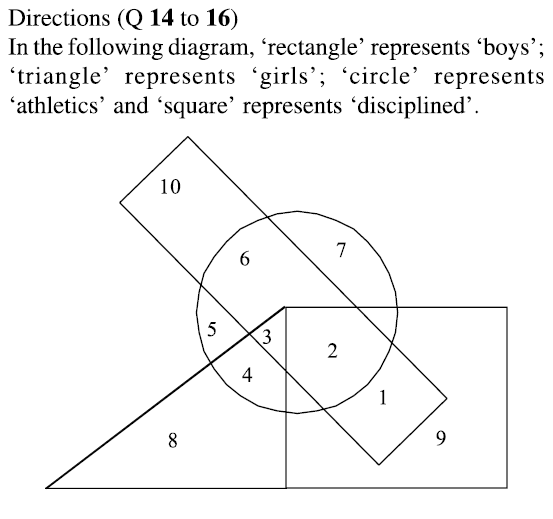 Q.14. Which number indicates the boys who are athletic and disciplined?

Q.15. Which one of the following indicates athletic boys and girls?

Q.17. Which of the following is not a Millennium Development Goal (MDG)?

(A) Improvement in maternal health

Q.18. The Taj Mahal is threatened due to the effect of

Q.19. Which of the following is the basic unit of study of ecology?

Q.20. Which of the following is not part of geological disaster?

Q.22. The system widely used for data collection and acquisition is known as

(A) Scalable Control and Data Acquisition

(B) Supervisory Control and Data Acquisition

(C) Acquisition of Data and Analysis

Q.25. In an Internet world, computers connected to Internet are identified by

Q.26. In IT Act, 2000, which section deals with the punishment for cyber terrorism?

Q.27. Which layer of the atmosphere is also called Ozonosphere?

Q.28. Which of the following is having the primary objective to disseminate countrywide higher educational programmes through TV along with appropriate use of ICT?

Q.29. Assertion (A): The Governor of a state exercises the power of issuing ordinance on the advice of the Cabinet.

Reason (R): The exercise of ordinance making power of Governor is discretionary.

Which of the following code is correct on the basis of A and R?

Q.30. In the 6th century BCE, which of the following places flourished as a centre of higher education?

Q.31. Which of the following Articles of the Indian Constitution originally referred to the Right to Property as Fundamental Right?

Q.32. Concerning the primary focus of the Five Year Plans in India which of the following is not correct?

(A) First FYP-Development of primary sector

Q.33. Which of the following is not a function of the AICTE?

(A) Promotion of quality in technical education

(B) Focusing on non-formal education

Q.34. With which of the following government schemes are the phrases har khet ko paani and per drop more crop associated?

(A) Because of internal problems of the Swedish Academy.

(B) Because no shortlisted author was found suitable.

(C) Because there was a controversy over the award of the 2017 prize to Kazuo Ishiguro. 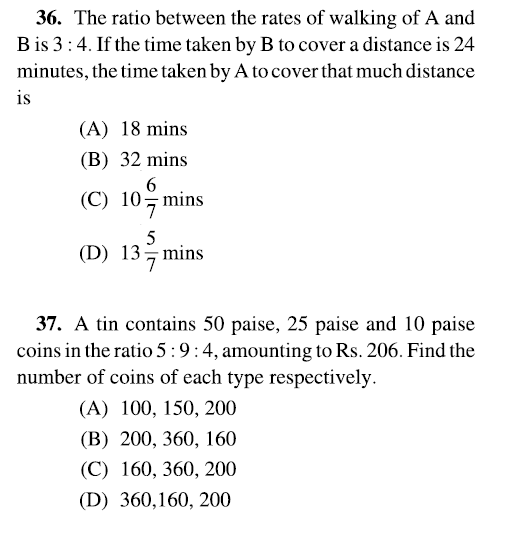 (A) A way of conducting research that is not grounded in theory.

(B) The choice between using qualitative or quantitative methods.

(C) The style in which you present your research findings.

(D) A framework for every stage of the collection and analysis of data.

Q.40. Which of the following is not an example of a “unit of analysis”?

Q.43. How many 4s are there in the following number sequence which are immediately preceded by 9 but not immediately followed by an even number?

Q.44. Choose the missing word in place of (?) on the basis of relationship.

Read the following passage and answer questions (46 to 50):

The Dalit movement in India is yet to be fully formed with a sizeable consensus. It lives in various forms, sizes and shapes. It has not yet formulated a cogent programme to take in politically conservative Dalits by bringing them into the wider Indian democratic experience. Dalit scholars and politicians alike can be seen struggling to formulate a workable theory of Ambedkarism or Dalitism that would be a manifesto for common liberation.

By exclusively relying on constitutionalism as a means of emancipation, this class of intellectuals argues for a Utopian dream. The methods of Dalit emancipation, however, remain unknown. The sooner India’s oppressed realise this, the better. One cannot depend on the limited conceptions of constitutionalism for deliverance. Owing to the limited control of this institution, the Constitution has become synonymous to a grievance cell offering no immediate solutions.

The linguistic accessibility of the Constitution and its reach to the oppressed is extremely limited. Few peasants would consider the Constitution as a written word that would guarantee them protection from the landlord’s real and financial whipcord. Similarly, few

beggars who are living on the mercy of donors’ charity would think that this dossier guarantees them equality and access to freedom. The idea of the Constitution is romantic. No one really knows its limitations but lauds its profundity without testing it out. Many Dalits are repeating the state’s narrative of constitutionalism as being the ultimate virtue – a god-sent panacea. It does nothing more than applying a lotion to massage one’s shattered ego. But when it comes to exercising the enshrined codes in the Constitution, Dalits seem to be harming their self-worth. This is because not everybody feels this document is close to their hearts as much as Dalits. Not everyone has similar expectations from the Constitution. Thus, it creates genuine gaps while considering constitutional morality as a common virtue. Hence, in such a situation of one-sided applicability, mutual cohabitation is a long shot. One has to pierce through the devious agenda of casteist rogues by injecting a radical antidote to set a tone of mutuality and respectability. Unless this is settled, no further conversation can be foreseen that will yield real results. [Extracted from Suraj Yengde, Caste Matters]

Q.46. The word “panacea” as used in the passage means:

(A) there is no solution in law for the problems of Dalits.

(B) legal solutions are not always the most effective.

(C) casteism is deeply entrenched in the legal system of India.

(D) there cannot be any permanent solution to the problem of Dalit Oppression.

Q.48. What does the author mean by claiming that “the idea of the Constitution is romantic”?

(A) The Constitution is unrealistic.

(B) The Constitution has many limitations.

(C) The Constitution is commonly understood to be profound.

(D) The belief in the Constitution is unfounded.

Q.49. Which of the following statements is not implied in the passage?

(A) Caste oppression will continue so long as people do not obey the Constitution.

(B) The Constitution is not equally accessible to all.

(C) Constitution morality is only an ideal and not a reality.

(D) The problem of caste calls for social and not merely legal solutions.

Q.50. Which of the following analogies does the author recurrently use with reference to casteism?