It was based on the study of 64 American cities.

According to this theory, patterns of urban land use are conditioned by the arrangement of routes, radiating out from the city centre which create a sectoral pattern of land and rental values which in turn influences the urban land use pattern.

According to the proponents of this theory, a high-rent residential district in one sector of the city will migrate outwards by the addition of new belts of housing along its outer arc. Similarly, low-rent housing might expand outwards in a different direction. In other words, once contrasts in land use have developed near the city centre, these differences will be perpetuated as the city expands. This idea of a sector-like expansion is an improvement on the earlier concentric model in that it takes into account both (i) the distance and direction of expansion, and (ii) acknowledges the importance of transport routes on the growth of the city.

The Sectoral Theory or Wedge or Sectoral Model of Homer Hoyt & Davis:

Based on: Study of 64 American Cities.

Rent areas in cities tend to be located in one or more sectors of the city.

It is a modification of the concentric zone model of city development developed by E.W. Burgess.

The benefits of the application of this model that it allows for an outward progression of growth. 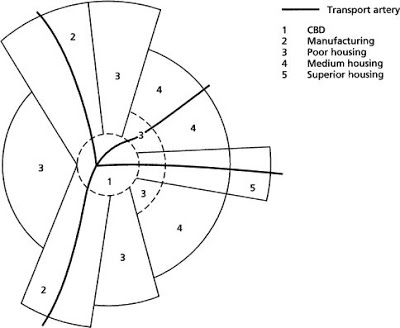